About 3:00 AM on my flight to Reykjavik, I noticed the couple next to me looking out the window and pointing. Since I was on the aisle and couldn't see, I asked what they were looking at. The woman at the window said there was a greenish cloud outside and they wondered if it could be the aurora borealis. I said, "I have a camera that can see in the dark better than we can," and reached in my bag to get it. I made my best guess as to the settings, reached across the two of them and pressing my lens against the glass, clicked the shutter. To our delight, there was the aurora lighting up the wing of the plane! A very auspicious sign.

Aurora over wing of plane

Landing in Reykjavik was less auspicious. My iPad was missing from my bag. I know I put it in my bag in the overhead compartment but now it was gone. Beyond the loss, I had intended to use it to contact Colby through the airport wifi and let him know I had arrived so he could pick me up.

I proceeded to where he had picked me up last Summer, "Joe and the Juice" in Arrivals, ordered a turkey, pesto and sun-dried tomato sandwich with avocado (Yum!) and a shot of fresh ginger and apple juice. At least the food was good, but I was pretty upset about losing my iPad. Best I could figure is that a passenger took it out of my bag. I was carrying a phone as well, but didn't have an Icelandic SIMM card and for some reason, it wouldn't connect to wifi. I went to a nearby convenience store (still in Arrivals) and bought one. After a half hour of trying to get it to connect, I was near despair. To my great delight and relief, Colby showed up. He said the others in our group had arrived a day early and were staying in hotels. He took me to his hotel so I could shower and change while he went to pick up the others. I felt back on track and much better after the shower.

The first place we went was to the famous Blue Lagoon to photograph pools of cooling water on the property outside the lagoon proper. Though Iceland has hundreds of naturally occurring geothermal springs and pools, the Blue Lagoon is man made. It is the cooling area for naturally occurring geothermal hot water which is used to drive turbines and produce electricity. The turquoise color of the water is due to the high silica content which makes the water milky in appearance.

Interestingly, the geothermal plant not only produces energy without releasing Carbon Dioxide into the air, it actually injects 5,000 tons of CO2 deep into the ground every year, where where the CO2 turns into rock in a matter of months. This technology could be a major player in reducing global warming.

Unlike our Summer trip where we just camped wherever was convenient, for this trip, Colby pre-booked hotel rooms every night. Our first night was to be in the "town" of Geysir. Along the way to Geysir, we stopped at Thingvillar crack, a place where you can see the junction of the American and Eurasian continental plates. This is the only place you can see the junction of these plates above water. The rest of that junction forms the Mid Atlantic Ridge, a deep underwater mountain range where upwelling magma pushes Europe and Africa away from North and South America. Iceland is right on this spreading continental divide. That's why Iceland has sixty active volcanoes.

Thingvillar is also the location of Iceland's first parliament, formed in 930 AD. It was the annual meeting place for the chiefs of Iceland and the predecessor of today's Icelandic parliament.

After viewing the crack from above, we drove around to see where a river dropped into the crack forming a waterfall called Oxarfoss. The falls were all the more beautiful because of frost that formed from a combination of mist and below freezing temperatures. Due to the overcast skies, our photos were nearly black and white. I could only see a little color in the water with post-processing.

Though I had been to Geysir last Summer, I didn't know that Geysir was very close to Gullfoss. It had been raining when we passed by last Summer and we didn't have time for the waterfall as we were crossing the entire South side of Iceland that night.

This trip, we had plenty of time in the late afternoon to photograph Gullfoss at sunset. What an amazingly beautiful waterfall. 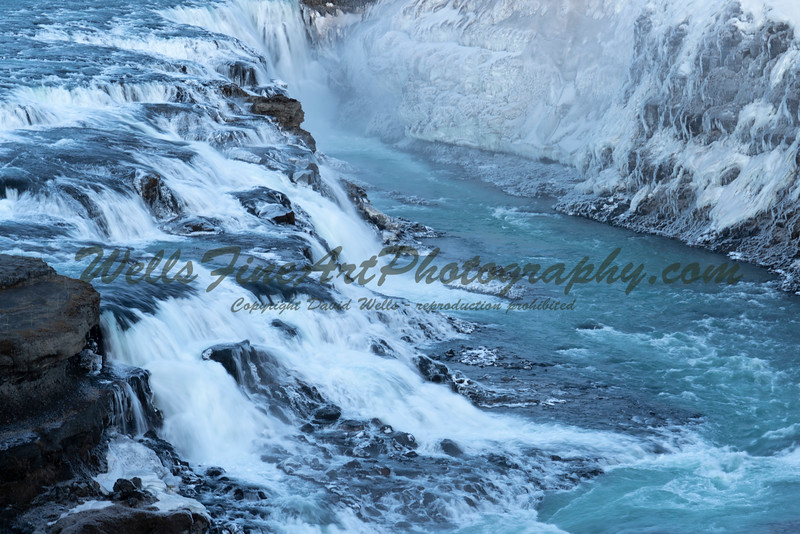 Since the sky was only partly cloudy that evening, we went outside after dinner hoping to see the aurora. Gradually, a slightly greenish cloud began to appear. Like on the plane, I could only see the color clearly with the camera.

There are two requirements to see the aurora. First, there must be clear, dark skies. Clouds will block our view of the lights as the phenomenon occurs in the upper atmosphere. Second, there must be a solar storm of sufficient magnitude.

The Aurora Borealis and it's counterpart near the South Pole, the Aurora Australis is formed when highly charged particles from the thermonuclear explosion that we call "the sun" hits our upper atmosphere. The particles are drawn to the magnetic North and South Poles where they slam into molecules of Oxygen, producing green and yellow, or collide with Nitrogen, producing magenta, violet and sometimes blue colors in the sky.

The stronger the solar storm, the brighter the colors. The strength of the storm is measured in KP, on a scale of 0 - 9. That night in Geysir was a KP of 3, a relatively weak storm. This is why for most of the time, we could only see a dim greenish glow in the sky.

There were moments that night though that the KP must have jumped higher because we could see the colors clearly with our naked eyes. As the intensity was increasing, I crossed the street to try to get away from the trees that were blocking the sky. l got a couple of shots looking down a dirt road as the storm peaked. The foreground was yellowish from the artificial lights of the hotel.

I have mixed feelings about compositing. I usually don't do it, but I can justify this one because this is the view I would have seen if we had driven five minutes to the viewpoint of Gullfoss during the peak of the aurora that night. The direction of the aurora is also correctly placed relative to Gullfoss.

After a good breakfast at our hotel (all our hotel breakfasts were good, with a wide array of fresh baked breads, pastries, pickled herring, eggs, bacon, oatmeal, fresh fruit, etc.), we continued Southeast towards the town of Vik.

Before reaching Vik, we passed a gorgeous waterfall I had walked behind and photographed last Summer called Seljalandsfoss. Colby said we would come back the next day to get it in better light.

We pressed on to another waterfall, often called "Hidden" or "Secret" waterfall. It really can't be all that secret or hidden because you can see it from the road, but to get to it does require climbing a small ladder over a farmer's fence and walking about a mile up a river canyon.

The actual name of the falls is Kvernufoss. What made it enchanting is 2 - 3 inch ice crystals in the moss below the falls, formed by the constant spray of mist and below freezing temperatures. Something I hadn't realized last Summer is that you can walk behind the waterfall.

After returning to our cars, we drove the short distance to a more famous waterfall, Skogafoss. The broad lip of this waterfall drops to a wide, shallow river. A slow shutter speed makes for a glassy river in the foreground.

That night, we had dinner at a lovely restaurant called Sudor Vik. I had a Thai chicken curry, salad and shared an apple pie. Everyone had something different and everyone loved their meal. We decided to eat there again the following night.

We awoke this day to fairly clear skies and went to the nearby beach that borders Vik. I found the grasses in the snow enchanting, as well as the spikes of rock (often called a "Trident" despite there being four spikes) at the point. The other side of that point is a black sand beach with basaltic columns named Reynisfjara. I had visited Reynisfjara last summer.

I was pleased to see horses on the beach and also took a few shots of the church on the hill above Vik. We later drove up to that church. It was cold, windy and the ground was covered in snow. The last time I was there was about 2:00 AM last Summer and the hill was absolutely covered in lupines and other flowers.

Trident with grass and snow 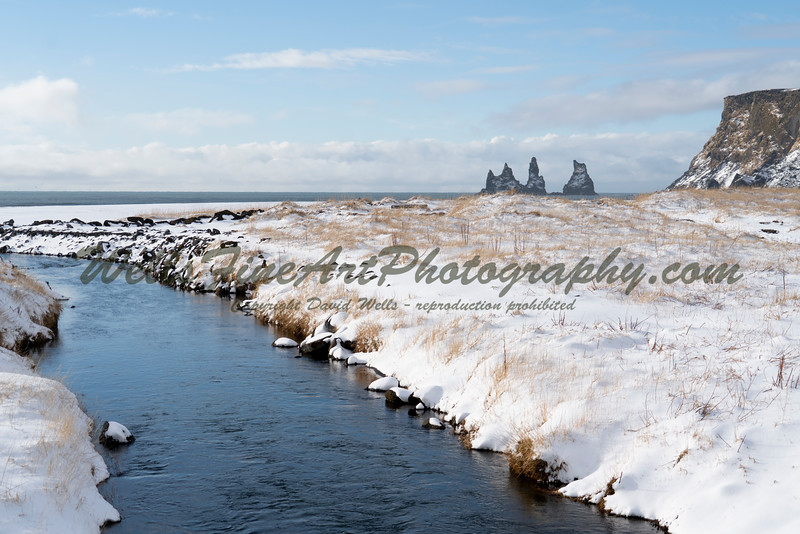 Riders near the beach

Vik church from above 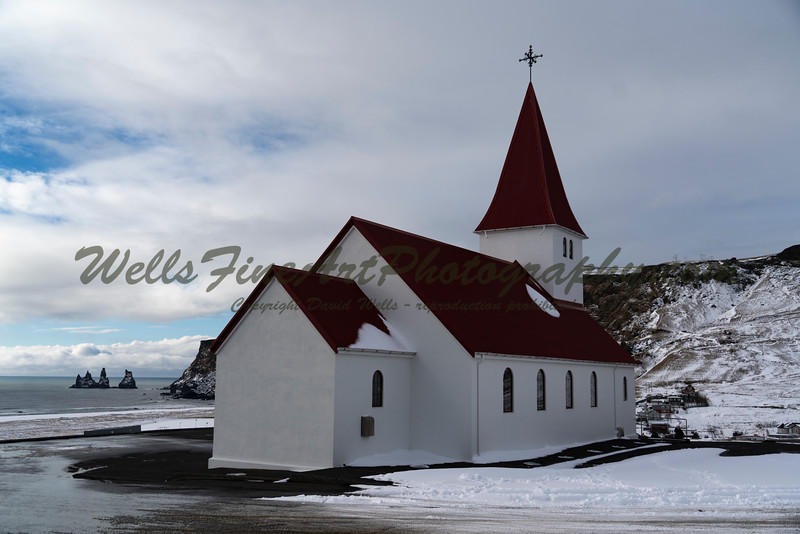 We spent some time together before lunch, processing images back at the hotel. Then we went to an area Colby knew where we could get close to a field of Icelandic horses. They were so friendly that one of them nibbled on my room mate.

In the afternoon, we drove back the way we had come to Seljalandsfoss. I was excited to see the low angle of the sun would likely create a rainbow. Sure enough, it was there when we arrived!

Seljalandsfoss with rainbow - and photographers...

Having been to Seljalandsfoss before, I knew that there is a pathway leading behind the waterfall and that if the sun were low (which it wasn't last Summer), I could photograph the waterfall, backlit by the setting sun.I had planned ahead and brought large plastic bags to cover my lenses and cameras so that only the front of my lens would be exposed to the mist. Before going behind the waterfall, I covered my camera gear, put on waterproof pants and windbreaker, micros-ike cleats on my boots and headed up the trail behind the waterfall.

It was so beautiful! I stayed pretty much in one place for nearly about an hour and a half as the sun set, creating different colors in the water. I shot mostly with my Canon 5DS using an Irix 15mm lens but the shot I printed is a 3 shot panorama using the Sony A7r3 and a 24mm 1.4 prime. The range of light and detail is absolutely stunning up close. I printed this one at 24 by 51 inches.

We dined again at Sudor Vik. The apple pie was so good, we considered stopping there again on our way to the airport.

The next three nights we planned to spend a few hours Northeast in the hamlet of Hali, near Jokulsarlon glacial lagoon.