It snowed all the previous night and was still snowing in the morning. We decided to get on the road after breakfast and head up to Jokulsarlon (the glacial lagoon) and our hotel rooms in the tiny hamlet of Hali.

It was snowing when we started

and was snowy on the road

Along the way, we stopped at a small cataract by the side of the road that I hereby name "Colbyfoss". 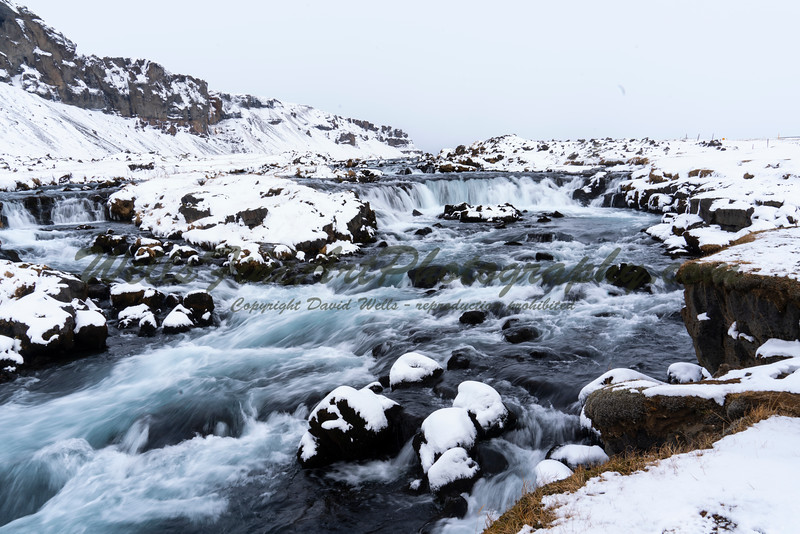 We also stopped at a glacier called Svinafellsjokul

One of our group (Victor) shooting Svinafellsjokul Glacier

By late afternoon, we arrived at Jokulsarlon. For those how haven't been there, the lagoon is at the terminus of the largest glacier in Europe. As chunks of ice break off the glacier and fall into the water, they float in the lagoon and gradually move out a channel into the ocean. There they are broken up by the waves and wash back up on the nearby beach. The sparkling clear blocks of ice on the basalt-black sand beach is a striking sight. Understandably, it's nickname is "Diamond Beach". We arrived at Jokulsarlon in the late afternoon.

The sun was obscured with clouds and the lagoon, though impressive, didn't make much of a photo. Colby asked the group if we wanted to stay there and hope the setting sun under-lights the clouds and gives color to the lagoon, or if we should head over to Diamond beach and see what we could get there.

The skies began to clear as we approached Jokulsaron

Having seen the boulders of ice at Diamond Beach as we were driving in towards the lagoon, I advocated for the beach. As it turned out, that was a good choice. The ice was front-lit by the setting sun and for a time we had the "Belt of Venus" (Earth's shadow at sunset) behind the icebergs.

While photographing the waves, I turned to get the light of the setting sun coming through the icebergs on the beach. I knew better than to turn my back to the waves but photography is a strange obsession. My boots were swamped by a wave and filled with ice water.

This is the shot that swamped my boots.

We were given 45 minutes to get into our hotel rooms, clean up and meet for dinner at the settlement's only restaurant. When I took off my left boot, over a cup of wet black sand poured out on the floor. Ahh! Now I had to clean that up too. My boots were soaked. My ski pants were soaked. I was frozen. I cleaned the floor, wrung out my socks, put a hair drying in my boot, washed the sand of my pants and took a quick hot shower.I quickly dressed with dry socks and fresh clothes, but the interior of my boots were still soaked and I no longer had ski pants to keep my legs warm.After a terrific dinner of mango chutney on fresh farm-raised char (a relative of salmon) raised by the hotels own fishery, Colby announced that the KP was rising, the sky was clearing and we were heading back to Jokulsarlon to try our luck at the aurora. My legs and feet were cold within minutes of stepping out of the car, but excitement about the aurora took over.

As I set up my camera and tripod on the edge of the lagoon, Colby said, "I've never seen that before," pointing to the purple streak in the sky ahead. Having almost no experience with auroras, I didn't know what made that purple different than the other purple I had seen in the sky but later, Peter (one of our group), sent a link to the phenomenon that scientists call, "Steve" for Strong Thermal Emission Velocity Enhancement. Apparently, that's what we saw. I feel particularly lucky to have seen and photographed it.

We soon left the area where we could see Steve because some rude guys with a searchlight mounted on a powerful drone were ruining our photographs. We moved away from the parking lot where their drone hovered, around a hill and continued taking photos of the aurora in a different direction.

About halfway through the night, the burning pain in my toes was giving way to complete numbness. I said to Colby, "I think I'm getting frostbite."  One of the two women in our group who are medical doctors overheard me and handed me two hand warmers. I thanked her profusely, took off my boots, wrung the ice water out of my socks and put int he hand warmers. Though hand warmers don't work long in boots (low oxygen), it was enough to bring back the feeling. The next day I told her, "I'm going to name some of my toes after you."

Another photographer getting the Aurora over Jokulsarlon Lagoon

Sometime around 11:00 PM, the group of guys with two very powerful and expensive drones mentioned earlier sent their drones over to where we were and shone a spotlight down on the icebergs, ruining any possibility of photography. They had previously chased all the photographers around a hill to get away fro their lights and now they followed us and drove us all away.  I walked up to the four of them and asked if they had permits. They said, "We have the permissions." I told them that regardless of that, they were extremely rude, ruining the only night that week predicted to have clear skies. They tried to make justifications but I accepted none of it. They had deliberately ruined our rare chance to continue photographing the aurora for no purpose. Based on their large trucks, they were either a professional film crew or a bunch of very spoiled rich boys. I think it was the latter.

The restaurant opened early for us the next morning so we could get down to Diamond Beach and photograph the sun rising behind the blocks of ice on the beach. Unfortunately, there was a rim of cloud on the horizon, so while we did get a lot of beautiful shots, we didn't get the sunburst diffracted through ice that I had hoped to see.

Diamond Beach in the morning

Diamond Beach in the morning

On the way back to our hotel, we saw reindeer a few hundred yards from the side of the road. I didn't have my long lens (150-600mm) with me, so the best I could do is an animals cape, using the reindeer as an element in a landscape.

It was snowing that afternoon, so we took naps and processed photos until near sunset. The snow and cloud cover blocked the sky that night. There was no possibility of seeing the aurora. We prepared our gear for the next day so we could get on the road promptly.

The next morning, the restaurant at Hali again opened early for us so we could get to Jokulsarlon and meet out guide for a hike to ice caves on the glacier. Colby had also arranged with our guide to come early, so we could have the biggest ice cave to ourselves for awhile. The hike was about two miles each way. Though the temperature was around freezing when we started, I was soon sweaty from hiking uphill towards the caves.

The first cave we reached was by far the largest. Colby suggested we go there first so we could photograph it without any other tourists around. The cave is called "Lightroom". It has two large openings in the top and is at least 80 feet wide. I had never been in anything like that before. The ice ranges from black (volcanic ash and sand mixed in the ice) to blue (high oxygen content) and of course white. To photograph it, Colby suggested doing multiple exposures on a tripod and blending them later.  This is because the range of light goes from bright sky to dark shade in the cave.

Our guide Lisa was used at a model to give scale to this cave and other caves. She, like the rest of us, is wearing a hard hat and climbing harness in case any of us fall into a crevasse. She also carried an ice axe.

After we took a few shots as a group, I found a view from the side that I felt gave more of a leading line. I then asked Colby to press my shutter while I got in the frame. I took off my shirt for that shot because I am writing an article on the health benefits of exposure to cold. Actually though, standing in the sun, I wasn't at all cold.

After shooting a few more caves, we hiked on to the edge of Jokulsarlon lagoon and had a lunch  on whatever snacks we had brought. The chunks of ice at the edge of the lagoon were beautiful in their own right.

A few weeks after our trip we saw that area on the news because a large chunk of ice broke off the glacier sending a wave up that beach where we had been. 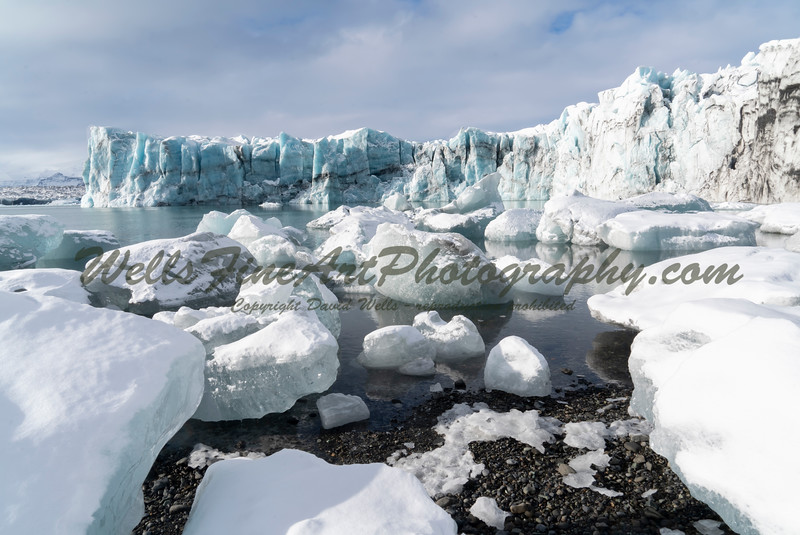 On our hike back off the glacier, we went into a couple more small caves, then were driven over the worst road I have ever seen on our way back to Jokulsarlon.  After a brief snack, we headed back over to Diamond Beach for the remainder of the light. That night, we stayed in because of cloud cover. We did have another delicious dinner at the hotel restaurant.

The next morning, the hotel again opened the restaurant early so we could grab a 15 minute breakfast and get down to Diamond beach before sunrise. We were driving down the road by 7:15 AM.

Again, there were clouds on the horizon blocking a clear view of the sun, but once again it was beautiful. We were in a hurry because we had to drive all the way back to Reykjavik airport in time to check in for our flights. In the last minutes before we had to get in the car, the sun came out and I got a few shots. I would like to come back and spend 4-5 days there just working on that shot. The Southeast coast of Iceland is such a varied and beautiful place. Maybe this Fall?....

PS - The following are a few shots from the road on our trip back to the airport.

Between Jokulsarlon and Vik

Steam vents on the mountain

PS - Below is a link to a video I put together using music I wrote. Having done this, I am inspired to take more video on future trips.