Okay. It’s 123 miles from Sprindale, Utah in the mouth of Zion Canyon. Or, 212 miles from the South Rim. Or, 265 miles from Las Vegas. In other words, it’s a long way from anywhere else you were planning to be.

Also, as noted above, there aren’t a lot of places to stay. Other than the one campground and one lodge, the nearest other rooms are Demotte Campground and Kaibab Lodge 18 miles away or Jacob Lake at 43 miles distant. As a result, space in the campground and lodge disappears as soon as it goes on sale. We booked a year in advance for the last and least popular week of the year, the end of the season in mid-October. After October 15, the roads are no longer guarenteed to be plowed and remain open. “Plowed?” you say? Yes. At over 8,000 feet elevation, the North Rim gets over 200 inches of snow a year. We brought tire chains just in case. As it happened, the last 30 miles of our drive to the North Rim was in a light snow.

The second week of October is pretty cold. Temperatures ranged from 30 to 65 degrees Farenheit. We were lucky to have very little wind and only one full day of rain. One of the smartest things my wife suggested we bring was a couple of books. They came in handy when the weather was bad. The inaccessibility of the North Rim pays off in the lack of crowds. The North gets about 10% of the number of visitors that the South gets. This is good because there are fewer easily reached viewpoints in the North.

Right as we arrived, the sun was about to set. So while Eileen was checking in to our room, I was running around looking for a break in the trees to get a shot of the truly magnificent sunset. People said it had been socked in with overcast and rain for the prior three days. As a photographer I met on the trail said to me, “It was like photographing the inside of an eggshell.”

Sunset from the Transcept Trail

The next morning, I went out at 6:00 AM, following the trail from our room to Bright Angel Point. The sun was out and so were the guests at the lodge. It was beautiful. The challenge photographically is capture some of the magnificence of the canyon. It is over 250 miles long and between 10 and 18 miles wide. The very vastness of it makes it hard to capture in your viewfinder. I try to frame it with something on the rim that provides human scale. Or pickout a detail that tells a smaller story. I shoot with full frame cameras (Canon 6D and 5DS). For the Grand Canyon, the widest angle I shot was a 24 to 70mm lens. If you try to capture more of the scene with say, a 16 mm lens, you’ll just make the canyon look smaller. In fact, I kept a 150 to 600mm zoom on my 6D just to challenge myself to pick out smaller features though as it turned out, I never needed more than 200 mm.

First shot of the morning 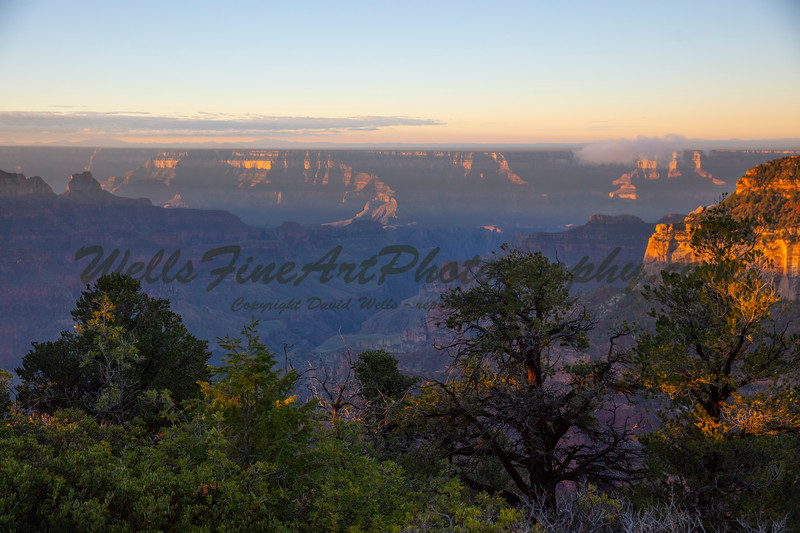 Framing the canyon with pines.

Near the end of the trail

Trail back to Bright Angel Lodge

The Lodge seems to grow there

The Bright Angel Lodge was completed in 1935. It is made from native stone and peeled logs. It is both rustic and beautiful. The interior displays some antique radios and decorative touches that give it a feel of the time it was built.

View from the patio

As I mentioned earlier, there are only three of easily reached vantage points with unique views on the North Rim. They are Bright Angel Point (right in front of the lodge), Point Imperial and Cape Royal. There are other viewpoints like Vista Encantata Picnic Area and Rosevelt Point Overlook, but they don’t compare to the first three. There are also overlooks such as Cape Final or Widforss Point that require 4 wheel driving or hiking to reach. Given the weather, we didn’t reach those overlooks but plan to do so in better weather.

Cape Royal projects out into the canyon farther than any other viewpoint. It is at the end of a peninsula of forest that extends out over the canyon. The Eastern side of the point contains a hole in the rock called Angel’s Window. It affords many photographic opportunities.

Looking down from above Angel's Window

Detail of fin to Wotan's Throne

The trail out to the point from the parking lot is about a half mile. The trail diverges left to Angel's Window and right towards the western view. Along the trail between Angel's Window the Cape Royal's western edge, we stopped to check out the local flowers and plants.

Cliffrose on the plateau

The view to the West from Cape Royal is awe inspiring. It was especially nice on this afternoon because the broken clouds and haze in the canyon made for streamers of light.

Looking West to streamers of light

On our first day, we drove out and stopped at every wide spot in the road, one of which was Point Encantada. We eventually took the turnoff to Point Imperial on the way back.

The most interesting feature in the view from Point Imperial is a spike of rock called Mount Hayden.

Foolishly, I hurried back to Bright Angel Point for the sunset (feeling frustrated that I had mostly missed it the day before) only to remember that the actual sunset is blocked from view the the plateau on the other side of Transcept Canyon. Note to self – tomorrow watch the sunset from Cape Royal.

The next day, we did plan our day to be at Cape Royal during the late afternoon. The rain broke up and we were rewarded with beautiful streamers of light playing on the canyon below. It was glorious!

Streamers of light from Cape Royal

We took a short hike nearby to a paleo granary and overhanding moss garden. I noticed the clouds above starting to yellow and we raced back to the car and up to Cape Royal as fast as possible. I ended up running to a spot on the rim just in time to get some of the best sunset shots of my life.

Those shots were the payoff I was looking for. Magnificent!

Interestingly enough, those printable shots were taken on October 10th, my dad's birthday. He is the one who took our whole family on vacation for a month every year to national parks throughout the West. He is the one that nurtured my love for the great outdoors and he is the one who was my role model photographer growing up. These shots are for you, Dad.

That night after dinner, we went out on the Bright Angel Point trail and got some shots of the Milky Way. There were still clouds in the sky but they actually added a nice foreground element to the shot.

The following day was rainy the entire day and night. The next day, the clouds broke up around noon and we headed back out to Point Imperial. We were rewarded with clouds and fog boiling up the canyon around Mount Hayden.

Our fourth morning was overcast

Fog boiling up the canyon at Point Imperial

We started to hike the Cape Final trail but decided we wouldn’t get back in time for the sunset at Cape Royal, so we took a few shots of the local flora along the trail instead.

We went on to Cape Royal for another sunset, but there weren’t the clouds that gave it so much color the prior day. However, the pneumbra or “Belt of Venus” looking East over the canyon at sunset looked good. This is a lesson I learned from photographing Bryce Canyon during the blue hour.

South past Vishnu Temple to the San Francisco Peaks

The next morning, we hiked out on Bright Angel Point one last time then packed the car and drove back toward civilization, catching some Fall color along the way.

The next morning - clouds in the canyon

Aspens by the road

We stopped at Jacob Lake to get gas, at LeFevre Overlook to see the Grand Staircase and at Mount Carmel’s Thunderbird Lodge for lunch (Home of the “Ho Made Pies”).

The Grand Staircase is the name for the eroded cliffs that step down from the plateau with Bryce Canyon to the Kaibab plateau of the North Rim. Of course, the eroded cliffs continue to step down all the way down to the bottom of the Grand Canyon, representing nearly two billion years of geologic history.

A couple things I learned about the geology this trip are:

1) the reason that the canyons leading to the Colorado river are so much longer on the North side of the canyon compared to the South is that the North is about a thousand feet higher and thus has more rain and snowmelt that erodes the North side.

2) what eroded the Grand Canyon so quickly (over about 6 million years) was the rapid drainage of a large lake to the East. The volume of water was so much greater than the annual flow of the Colorado river is today.

After a few stops along the Zion-Mount Carmel highway, we stopped in Springdale at Sol Foods Market for supplies and the Whiptail Grill for dinner. I pulled out the long lens for this closeup of the Watchtower during sunset.

Along the East Zion/Mt Carmel Road

I think next time at the North Rim, we will try for the lightning and rainbows of the monsoon season (July and August). I would also like to try sunrise from Point Imperial. As it is, that one afternoon and sunset made the whole trip worthwhile.